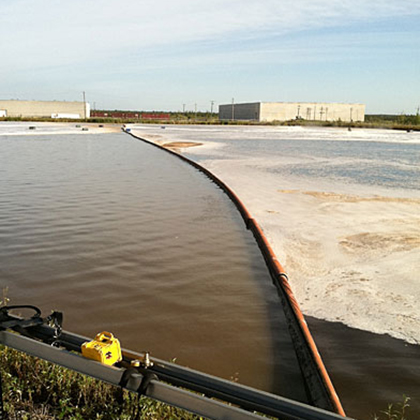 Since 1964 JPS Industries has been best known for the manufacture and installation of the finest baffle curtains in the world. Baffle Curtains so strong, many are still outperforming, 30 years after installation.
In addition to custom lagoon baffles, JPS offers a number of Industrial Services including: Dive Services, Dredging Services, Maintenance and Repair and Training, plus a number of products that improve the efficiencies of wastewater lagoons.

Solutions have been provided by JPS for pulp and paper mills, oil and gas refineries, wastewater treatment, food processing plants, chemical facilities, manufacturing processes, power generation plants and many other municipalities and industries.

Treatment lagoons are exposed to the elements, with the structure of a baffle system taking a beating, day in and day out, in sometime severe conditions.
JPS Baffle curtains are engineered to absorb shocks evenly throughout the structure, under normal environmental changes.

No other manufacturer makes this claim, and has a warranty that is next to none.
A preoccupation with precision, quality and longevity of baffles has led to JPS holding patents on many design innovations, which increase the efficiencies and longevity of JPS lagoon baffles.
In fact, 75% of the baffles in paper mills in Canada and the United States were built and installed by JPS.

Warranty and Guaranteed
“Not just any, but the finest constructed baffles in the world!” A serious claim of Joe Santamaria Sr. founder of JPS. “Our baffle curtains are so well made, some have been in services for over 30 years and under extreme conditions!”

Before baffle innovations and many of the standards in place today, JPS worked in a different type of black water – oil spills. The U.S. Navy had become aware of the pollution in the New England harbor and the surrounding areas, largely caused by oil. As a civilian contractor for the Navy, Joe Santamaria Sr. was asked to help clean up oil that was a daily occurrence due to the ships. Joe jumped at the chance. It was a challenge and an opportunity to travel. Initially there were no standards or quality products on the market, the first oil booms were crude. “We set up the first types of booms, using logs, firehoses, pretty much anything we could make work to contain the oil.” Joe recalls. As the process evolved during the cleanup, it became apparent to Joe that there was need for specific types of oil booms. In the spring of 1964, JPS began by experimenting and manufacturing dedicated oil booms.
1969 was a turning point for JPS, due to the request of a Norwegian engineer to collaborate. In Norway, they were having many of the same issues relating to oil booms. From that collaboration was born the first boom that made sense.
“It had independent flotation, continuous bottom weights and many other developments that are still in use today. It almost mimicked a very solid fishnet, and the business took off!” Chucked Joe.
The Exxon Valdez oil spill was another bench mark for JPS. Called onsite by the Bureau of Land Management, JPS was hired to spearhead the initial cleanup. “We loaded booms and flew to Alaska. Exxon gave us blank purchase orders to help. We used the local fisherman and processing ships who were landlocked, because of the spill, to deploy the booms. The fish and Game Department had us install separate booms to isolate and protect salmon streams – it was quite an adventure.” He adds.
Municipal and commercial applications for JPS began in South Carolina with the development of a deep boom that baffled the lagoon system. The idea was to circulate the waste water, throughout the lagoon, before it is released. “It worked beautifully and we were busier than we knew what to do with!” Remarks Joe. JPS baffles are now around the world, in municipal and industrial applications.

JPS Industries is family owned and operated with many long time employees who have seen many the changes throughout the years. According to master diver Karl Syfrett, “We are just one big family, the best part is when we have ideas, the bosses listen carefully, that’s how we make our products last.